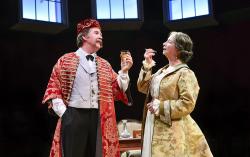 Berkeley's Aurora Theatre opens their 25th season with the same play that launched their first: "Dear Master." An autobiographical two-person stage show about 19th-century French novelists is the traditional silver anniversary gift, but it's usually hard to come by.

It starts when Sand is the only one to give Flaubert's second book a good review. She compares him to Dante -- the quickest way to a man's heart. Wisely comes into the show with a Santa Claus-like twinkle in his eye and a mustache with which you could wax a ballroom floor. King looks like the great aunt who used to tell you war stories about the Old Country.

Flaubert's a crusty cynic about everything except art, always boiling with indignation. (He'd be great on talk radio, and he'd probably shoot us for saying so.) He's highly sensitive, but a little too showy and indulgent about it, in love with being a martyr. He also lounges around wearing an embroidered fez, which means now we know what we really want for Christmas.

Sand is stony and practical about both writing and public opinion ("At 60 I'm tolerated; they can always just say I'm senile") but flies into rapture when talking about the two things Flaubert hates most: politics and relationships. King all but sings Sand's history as a revolutionary championing socialism during one of France's many, many revolutions.

As in real life, the two never actually meet, each staying on their side of the Annie Smart-designed stage: His half closed and womb-like, hers exposed and vitalized. This makes their relationship (and the show) a little frustrating. Not even being able to hope that they might come together means you're dissatisfied from the start.

And of course, the pair spend too much time talking about writing. This admittedly seems like a stupid complaint: What else are two novelists going to discuss? But do real people care what writers have to say about writing? Because they probably shouldn't.

That's not our opinion, by the way, that's Flaubert's: He says the most ordinary person is more engrossing than the most profound author. And he's right. Writers writing about writing becomes tiresome (just like movies about movies and plays about plays).

More rewarding by far hearing about Sand's days as a revolutionary, Flaubert's decadent youth touring the Middle East (even if he is a bit of a blowhard), or their shared time toughing out the disastrous Franco-Prussian war. But that makes "Dear Master" prone to the worst trap waiting for plays about history: Wishing the show were about something else.

So as a play, "Dear Master" is somewhat unrewarding. The show does, however, make for great actors' exercise, with two performers building an intimate bond while always technically remaining apart. Add to this the constraint of playing real people too well known to let anyone be completely freewheeling with their read of the part, and the challenge becomes more engrossing still.

Even our stony critic's heart has to melt a little at the sincerity on display.

If that's what you're looking for, Aurora's new "Dear Master" and its pair of leads still deliver. But the delivery may be frustrating. Flaubert said that exuberance is better than taste; it's not much of a compliment, but in this case, he may be right.