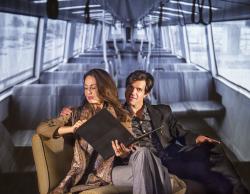 Nothing in "The Real Thing" at Berkeley's Aurora Theater is real.

Of course, plays are never real, that's by and large the point. "The Real Thing" is just a bit more aware of it.

This 1982 show from Tom Stoppard may or may not resemble the playwright's life, depending from what angle the sun hits it. But its centerpiece character Henry (a deviously self-satisfied Elijah Alexander) is definitely akin to Stoppard, a playwright whose addictions to sharp wit and ego sometimes come at his own expense.

In a story that spans many years and competing perceptions of reality, Henry runs off in an affair with Annie (Liz Sklar, the highly assertive Desdemona in Cal Shakes' "Othello" last year), the much younger wife of his play's leading man.

But of course, their own relationship soon sags under the weight of jealousy, suspicion, uncertainty, and the show's coyness about what's true or not.

And of course, some scenes mirror the actual play that we, the audience, are watching. Henry's first wife (a very knowing Carrie Paff, multiple-time star of "Ideation") accuses him of stiffing her role in his play to make himself look better, for example. That, of course, might be true of "The Real Thing" also.

It's a nesting tesseract of stories, illusions, lies, feints, pretenses, personal avatars, performances, and misapprehensions, building out from each other like chains of molecules.

Annie acts preoccupied with activism, championing Brodie, a Scottish soldier imprisoned for being a conscientious objector. (He set fire to a war memorial.) Henry, on the other hand, is an idealist only about writing and pretends to be openly insincere about everything else.

Brodie himself (Tommy Gorrebeeck from Aurora's brilliantly funny "The Monster-Builder") pops up only at the end but hovers like a ghost over the entire play. Henry hates him reflexively but feels threatened by the idea that he might be real in a way that no one else in "The Real Thing" is.

To be honest, we've reached a point culturally where "The Real Thing" may feel smug. It's possible all of this self-referential stuff was more clever back in 1982, but now it tastes very indulgent.

But even though the show's own cleverness weighs it down at first, gradually it wheedles its way into your graces, and in the end, you surrender because, despite everything, it's sincere after all, and that turns out to still count for a lot.

(The fact that it's so witty that you almost want to slap it doesn't hurt either.)

He's a wry, cavorting, glorious jester. And whenever "The Real Thing" runs long or gets lost in itself, he pulls it back on course. Timothy Near's previous Aurora show was "Master Harold And the Boys," another play graced with many fine actors but mostly imbued with the spirit of one enormous centerpiece performance.

Characters in this show tend to get hung-up on objects -- passports, photos, records, souvenirs -- hoping that physical things will provide certainty.

But the ever-mercurial set, consisting of many nearly identical pieces of furniture that rearrange into new combinations for each scene, remind us that nothing can really be trusted. Because everything onstage is always an act.

"The Real Thing" runs through March 5 at the Aurora Theatre, 2081 Addison St. in Berkeley. For tickets and information, call 510-843-4822 or visit AuroraTheatre.org